I have been following Zeit for a while , a company that provides easy management of cloud infrastructure through their CLI tool Now, they characterize for having top-notch team lead by Guillermo Rauch @rauchg (a well known figure in the javascript ecosystem) and a wide set of open source tools, frameworks and libraries (https://github.com/zeit), they are a young but promising company that strives to reduce friction between writing code and deploying it to the cloud.

Make Cloud Computing as Easy and Accessible as Mobile Computing.

That being said I would like to tell you a history about their latest product release Now 2.0 and how they went from the serverless docker containers to Lambdas function model, let’s get started.

In August of 2018 they have announced the release of a public beta for Serverless Docker Deployments the premise was simple: write your whole infrastructure on Dockerfiles and deploy them on the cloud in one command! sounds amazing, right?

Yeah! lets port all our docker containers to Zeit , use Now CLI and production ready in one command straight in the cloud! in your face AWS! well no that fast my friend … 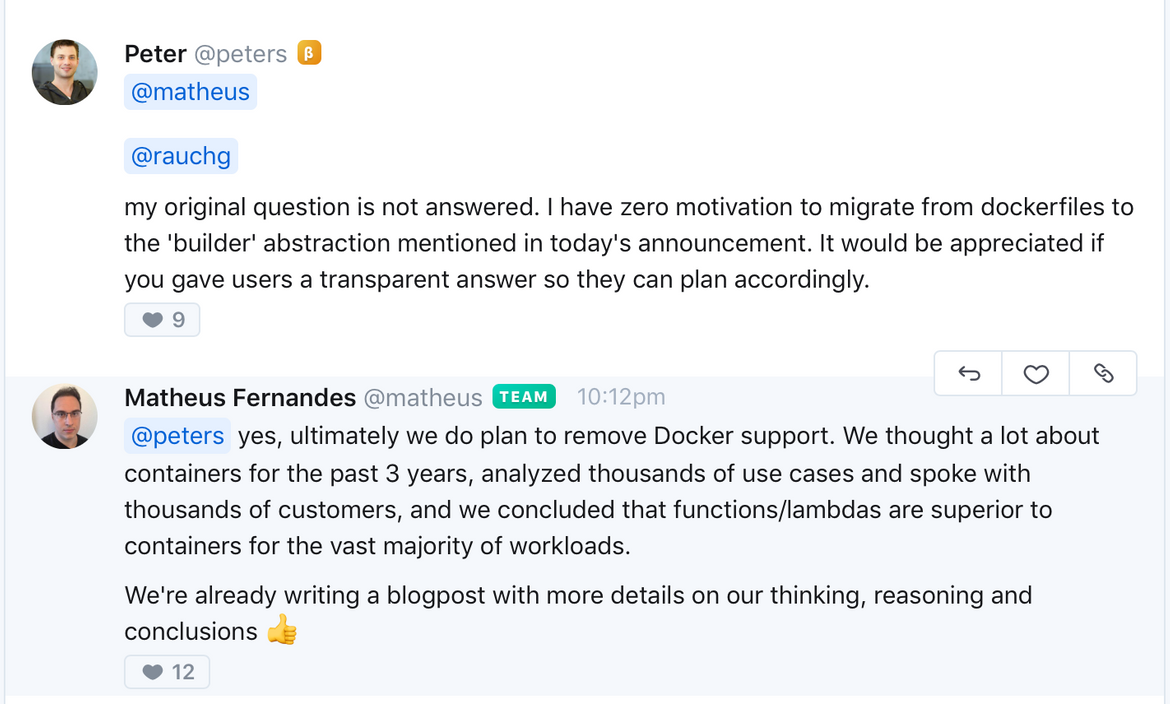 Unfortunately, this change on the platform haven’t been well informed/documented or anticipated by Zeit and generated unhappy developers in their community :(. The deprecation announcement of serverless docker service took by surprise all early adopters, furthermore they didn’t create an official statement of the reasons for such change neither mentioned when your code will stop running on Now V1 creating a notable uncertainty in a field where you can’t be uncertain :D, not cool!

So what about Now 2.0? They have a new model base on lambda functions, no more containers, instead of docker files now you have to create a JSON configuration file specifying the builders you going to use for each file type and the routes of your app as the minimum requirement.

So why the switch? …

Yes ladies, the size matter, fortunately for us smaller the better!

Docker images sizes are big compared to the code you need to execute for running your business logic, more code you deploy more time it takes to run, in a world where the trend is to go minimalist, containers are not a great fit. Having big images increase costs for running infrastructure and make harder for them to unfreeze instances, reduce the time for cold starts and scale the process for huge amounts of requests while keeping the cost as minimum as possible is not viable with this model.

Some folks in the community think that the abrupt release of Now 2.0 and deprecation of v1 follow the request of stockholders for a possible acquisition from some of the biggest cloud providers (AWS)

you wonder what CloudFlare has to do on all this, it may be that they just released an infrastructure model that can be faster, secure and cheap to run that docker serverless containers, meaning that if you don’t shift your strategy 100% you may end up being irrelevant

The majority of the Zeit community felt unhappy or disappointed with the way they announced the release of Now 2.0, this brought a considerable amount of uncertainty to the community and when is time to choose your cloud provider for your client uncertainty is something you don’t want in the equation.

“Organizations which design systems … are constrained to produce designs which are copies of the communication structures of these organizations.” — M. Conway

What do you think ? should we give a second chance to Zeit?

Yes, I believe they will keep pushing the state of the art for cloud computing and development experience, is not an easy path though, but I trust the team behind Zeit will improve their communication strategy going on. I hope this was just a small bump on their way, that being said, I wouldn’t deploy critical business process to their infrastructure until it reaches a certain maturity.

Get the latest posts delivered right to your inbox

Once upon a time a logistics company called Roma, in the beginning, it operated with local customers offering an excellent delivery service…